Born in Manorville, New York, Seth Raynor, our golf course architect, studied civil engineering at Princeton University. He left school without graduating in 1898 and began his career working as a surveyor. In 1908 he was hired 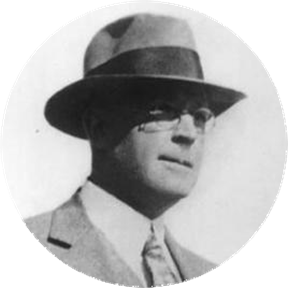 by Charles Blair Macdonald to survey the grounds and supervise construction for the future National Golf Links of America, which was completed in 1911 in Southampton, New York. This commission began a long professional relationship with Macdonald, under whose tutelage Raynor built numerous golf courses.

By 1916 Raynor had renovated at least five courses without Macdonald and had two of his own designs open for play. Then the First World War brought the development of golf courses to a virtual halt. By 1919 construction was underway on many of his layouts and he was designing or redesigning dozens more. It was in 1921 that plans for a third course in Southampton made the news and from the start Raynor's name was associated with the project that would become Southampton Golf Club. Raynor was 33 years old at the time and had been married to Southampton native Mary Araminta Hallock for four years.

When work began in 1925, Raynor was one of the most sought-after architects in the U.S. His own plans cannot be found, but a detailed rendition from May 1927 by Wallace H. Halsey of Raynor's original layout was unearthed in the attic of the Club and now hangs in the club house. Shortly after the first season of play at Southampton in 1926, Raynor died of pneumonia in Palm Beach at the age of 47.

In 1967 the Club hired William F. Mitchell to "modernize" the course. Cross bunkers were removed to make the course easier. Soil was moved from the present-day practice range to raise greenside bunkers above the grade of the greens, something Seth Raynor rarely or never did. The Mitchell bunkers were of a modern style as opposed to the classic flat bottom steep grass slope of the Raynor bunkers. A large tree planting project was undertaken to add rows of Silver Maples lining each side of the fairways on almost all holes east of Tuckahoe Lane. These trees, which ultimately became very large as they matured, took an open links style back nine and turned it into parkland style golf holes. Fortunately, the original green pads were largely untouched, and some classic greens remained although they had shrunk in size as so many greens have over time. After some years of drought in the mid 1960's a new 18-hole automatic fairway irrigation system was installed for the first time.

During the decade from 2000 to 2010, the focus was on improving the golf course. It was suggested by some club members to consider restoring the course to be in the classic Raynor style. Under the guidance of club president, Vincent Armusewicz, many projects were undertaken. The club house was extensively renovated, the pro shop was rebuilt, secondary rough areas were allowed to grow back to their more natural state of fescue and broom sedge.

After consulting with some of the top names in golf, it was determined a Master Plan for the golf course was needed. At the suggestion of Bill Coore, the Club hired Golf Course architect Brian Silva to prepare a Master Plan to return our course back to the design themes of Seth Raynor. Brian Silva had extensive experience with golf course design and the restoration of classic courses designed by the likes of Seth Raynor and Donald Ross. With the assistance of many aerial course photos dating back to 1938, the first edition of the Master Plan was presented in 2004 and adopted by the Club. The work largely consisted of removing excess soil, installing Raynor style bunkers and creating mounds with the soil generated from the project. Many greens were enlarged and squared up where appropriate in the Raynor fashion. New irrigation was installed around each green. The work was completed around the end of November 2010.

In 2025, Southampton Golf Club will be celebrating its 100-year anniversary.